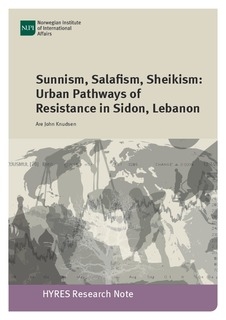 This brief analyses Salafism as an urban phenomenon, with an emphasis on the contentious period following the Syrian uprising turned civil war (2011–present). To understand Salafism’s popular appeal, it is necessary to examine the pathways of resistance in specific urban contexts. In Lebanon, Salafism expanded from its Tripoli centre to secondary towns and cities such as Sidon, where Sheikh Ahmad Assir’s neo-Salafism became a political force and can be classified as a “new social movement”. Neo-Salafism, is not built on religious credentials and authority, but combines populism with sectarianism. This also accounts for its popular appeal, especially after 2011, when the Syrian conflict stoked Sunni-Shia tensions and anti-Hizbollah rhetoric. The erosion of Sunni political pre-eminence (“Sunnism”) and the crises in the Sunni religious (Dar al-Fatwa) and political establishment (Future Movement), prompted a temporary shift from “Harirism” to “Sheikism” that transferred the moral leadership of the Sunni community from the political elite to the lay town preacher; Sheikh Ahmad al-Assir. This also involved a shift in the locus of contentious politics from the capital Beirut to secondary cities such as Sidon and a strategic shift from electoral politics to grassroots’ protests, sit-ins and rallies. Ultimately this led to an armed confrontation that crushed the Assir-movement, eroded its popular support and was followed by an electoral defeat that made political elites reassert control. HYRES – Hybrid Pathways to Resistance in the Islamic World HYRES studies the interaction between Islamist movements and the state in the cases of Iraq, Lebanon, Libya and Mali, and is designed to answer the following question: Why do some Islamist groups pursue their political and religious project within the state to which they belong – while other Islamist groups refuse to accept these borders, seeking instead to establish new polities, such as restoring the Islamic Caliphate?