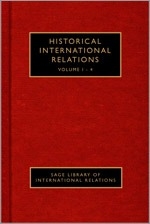 The History of International Thought

Being a distinct discipline entails being able to recount the disciplinary history and pre-history, and in IR this has led to a sustained engagement, first with the history of international thought in the classical sense, then with historiography. Over the last decades, scholars have increasingly come to see International Relations Theory neither as the recurrence of ancient patterns of thought nor as a miraculous conception of the early 20th century. Rather, continuous stories have been written, where IR has become tied to a wide variety of previous thought. In this volume we explore this scholarship in breadth, explicitly opposing the notion of “great traditions” and “great debates”, and focusing primarily on the challenges, and on works undermining, redirecting or expanding the canon.