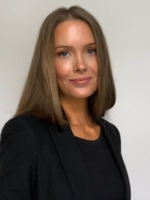 Ina Holst-Pedersen Kvam is a Researcher at the Royal Norwegian Naval Academy’s Section for Seapower and Naval Leadership and the Norwegian Institute of Foreign Affairs’ Research Group on Security and Defence.

Kvam holds an MA in Comparative Politics from the University of Bergen. Areas of expertise include the Russian Armed Forces with a particular focus on seapower and developments within the defence structure, military doctrine, operational art and tactics.