Åshild Johnsen starts at NUPI on August 24th. She will join the Institute's research group on International Economics.

Åshild wrote her master thesis on poverty in China, and has a PhD in economics from the University of Stavanger (march 2015) focusing on inequality and poverty in China, as well as experimental studies of economic behavior. She has previously worked as a research assistant at NUPI, and will now work in several projects on international trade, as well as IT and inequality.

Åshild Johnsen is an important strengthening of NUPI's activity in the field of international economics. 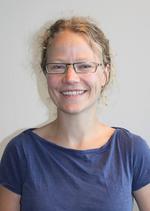