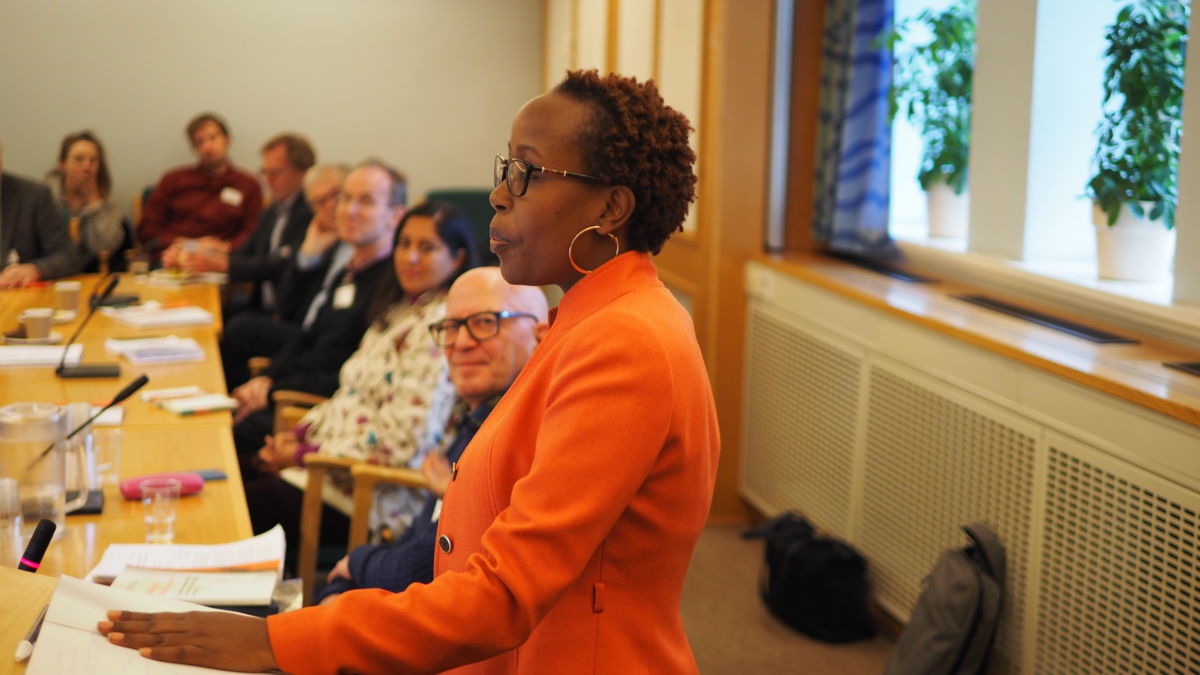 - How does the international tax system affect domestic revenue systems in Africa? New book from TaxCapDev Network launched in Norway

After having being previously been launched in Kenya and Tanzania, the book «Lifting the veil of secrecy: Perspectives on international taxation and capital flight from Africa” was officially launched in Norway on March 5th at an event in the Norwegian Parliament. The event consisted of presentations on issues being discussed in the book, as well as discussions of the role of Norway in the tax development field. The panel consisted of book editors Odd-Helge Fjeldstad, senior researcher at Christian Michelsen Institute and Sigrid Klæboe Jacobsen from Tax Justice Network Norway and they were joined by Attiya Waris, Senior Lecturer, Law School, University of Nairobi, Cathrine Ngina Mutava, Associate Director, Strathmore Tax Research Centre, and Olav Lundstøl, Policy director - Tax and Capital flight, The Norwegian agency for development cooperation (NORAD).

Towards a more holistic view of the tax system

The book focuses on the international tax system and how it affects and interacts with the domestic revenues systems. For instance, the leading actor on international tax policy, the Organization of Cooperation and Economic Development (OECD), launched in 2015 its BEPS action plan that consists of new tax standards. The aim is to smooth international taxation and cut down on tax avoidance and evasion. However, according to Odd-Helge Fjeldstad, people from African countries working on tax are saying that they are struggling with the complexity of the BEPS plan.

– Another issue is that we don't know enough about how the systems of international taxation affects other domestic taxpayers behavior, the domestic tax systems or the tax lobbying of governments, he continues.

– An example: The Panama Papers revelations about the Icelandic prime ministers use of tax havens, led to mobilization and the people demanded the resignation of the prime minister. But what happened in Tanzania? The opposite. Such revelations have in fact a paralyzing effect on the people in countries with high corruption. This is also confirmed by research done by Kolstad and Wiig at CMI (2017). Instead of revelations leading to mobilization, they only confirm the already existing perceptions of the state leadership: “This is how our leaders act, it’s impossible to do something about it”, says Odd-Helge Fjeldstad.

Considering the event taking place in the Norwegian parliament, a natural discussion was the Norwegian efforts on tax assistance and aid.

– What should be the Norwegian focus on tax assistance in Africa?

– Norway should help with expertise, but it is vital that this is done inside the country that’s the subject of assistance, not in Norway. It’s also important that Norway set high demands for financial transparency corporations operating in Africa. If a company is coming to operate in Africa, they must declare what they are doing, declare their tax reports and make them public. This should be done in all the countries they’re operating in, not just in Norway, says Cathrine Ngina Mutava, Associate Director, Strathmore Tax Research Centre.

– There is a slight misplacement of tax aid. It goes into revenue authority, but this is not where laws and regulations change. There could be made more efforts to assist the ministries of finance, says Attiya Waris, Senior Lecturer, Law School, University of Nairobi.

– If Norway were to sign more tax treaties, make them fair, says Cathrine Ngina, referring to the ActionAid report which criticized some of the Norwegian tax treaties with developing countries.

– Norway should also engage with thinkers on the continent, they know the society and the right people to talk to, concludes Attiya Waris.

Norway signed the Addis tax Initiative (ATI) in 2015 and committed to double the contribution to Norwegian tax aid in the period 2015 to 2020. At the time of the commitment, the tax aid amounted to 134 million Norwegian kroner. In the following period the amount was however drastically lowered to 44 M NOK, due to different political views and program issues. However, during the event in parliament, Olav Lundstøl from Norad announced some good news.

– A new strategy for the Norwegian tax aid program “Tax for development” is now confirmed and the funding is increased with 90 million. This includes an additional promise to further increase the amount in 2019 and 2020 in order to fulfill the ATI commitments, says Lundstøl.

– The constant push from civil society and the research coming from the TaxCapDev network has been invaluable for the Norwegian move on tax aid, continues Lundstøl.

The full book can be downloaded here