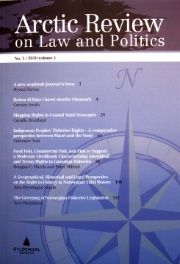 The Arctic as a booming oil and gas province has been a predominant geopolitical representation of the region. However, the shale gas revolution in the United States and the drop in oil prices since late 2014 has reduced the viability of many high-cost Arctic oil and gas prospects.

Little scholarly attention has been paid to the consequences of pursued but unrealized natural resource-based projects. This article brings literature from geography and science and technology studies into conversation to map out a preliminary research agenda for understanding how these “shelved futures” are still likely to matter in Arctic communities and policymaking. This conceptual argument is bolstered with a short exploratory case study of Murmansk, Russia. The qualitative-interview based case study illustrates two ways in which the Shtokman gas project retained regional significance, even three years after the project was suspended. Specifically, these are 1) a comparatively negative assessment of the broader socio-economic prospects of the region, and 2) expanded and possibly changed understandings on the part of the different stakeholders (business, government, civil society/the public) about their own and others’ potential roles. The semi-structured interviews with stakeholders primarily focused on recollections of petroleum companies’ corporate social responsibility (CSR) efforts, as these efforts were a concrete harbinger of the much-trumpeted oil and gas future.