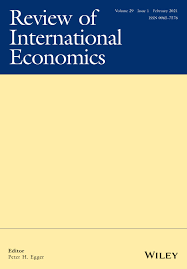 Why do firms import via merchants in entrepôt countries rather than directly from the source?

An increasing share of world trade happens indirectly via merchants in third countries, so-called entrepôts. This article uses an exhaustive and highly disaggregated dataset for Norwegian firms’ import transactions to study the motives for importing through such merchants rather than directly from the source country. I first show that transactions via entrepôts are much smaller than transactions from the source. I then study which factors are associated with the probability of importing indirectly. Source country characteristics – especially high trade barriers and unfavourable geographical locations – are important when time-invariant unobserved heterogeneity is not controlled for. When controlling for this, however, firm- and product-level characteristics stand out as the main drivers. Smaller and less productive firms more often import via entrepôts, especially when importing product-source combinations that are relatively unimportant in their total imports and when importing products with low price dispersion and high value-to-weight ratios. The results are in line with theories suggesting that merchants facilitate trade by offering reduced fixed trade costs for firms that trade through them. As such, they may help smaller and less productive firms to import.