The state, globalization and industrial development in India: the political economy of regulation and deregulation (INDEVIND)

2013 - 2016 (Completed) Project number: 225825
Research Project
This project will study the role of the state in industrial development in India.

Why have some states been able to promote rapid industrialization and economic growth and not others? This is one of the key questions facing students of political and economic development. The focus of this project will be on the nature and extent of state policies and forms of regulation and intervention in industry. The project aims to contribute to ongoing debates about globalization, the economic role of the state and varieties of contemporary capitalism.

First, the evolution of the regulation regime can be used to assess the extent to which global pressures towards convergence emanating either from world market competition or from global institutions such as the WTO and TRIPS have led to a liberalization of Indian policies and thereby to a convergence towards a liberal, market-oriented form of rule. Second, it can illuminate forms of institutional variation of capitalist organization. And finally, the project can contribute to the debates about the role of the state in promoting economic development and the viability and relevance of the idea of the developmental state in contemporary globalized capitalism. 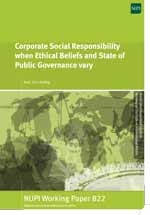