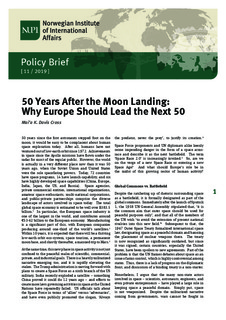 50 years since the first astronauts stepped foot on the moon, it would be easy to be complacent about human space exploration today. After all, humans have not ventured out of low-earth orbit since 1972. Achievements in space since the Apollo missions have flown under the radar for most of the regular public. However, the world is actually in a very different place now than it was 50 years ago, when the Soviet Union and United States were the sole spacefaring powers. Today, 72 countries have space programs, 14 have launch capability, and six have highly developed space capabilities (China, Europe, India, Japan, the US, and Russia). Space agencies, private commercial entities, international organizations, amateur space enthusiasts, multi-national corporations, and public-private partnerships comprise the diverse landscape of actors involved in space today. The total global space economy is estimated to be well over $383.5 billion. In particular, the European space industry is one of the largest in the world, and contributes around €53-62 billion to the European economy. Manufacturing is a significant part of this, with European companies producing around one-third of the world’s satellites.2 Within 10 years, it is expected that there will be a thriving low-earth orbit eco-system, space tourism, a permanent moon base, and shortly thereafter, a manned trip to Mars.