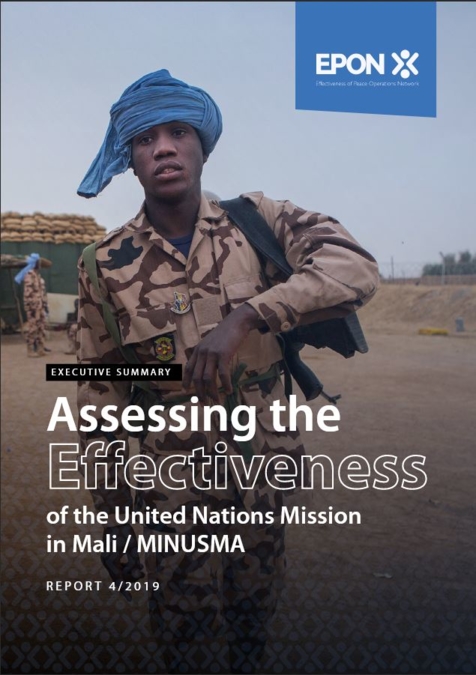 Assessing the Effectiveness of the United Nations Mission in Mali (MINUSMA)

This report assesses the extent to which the UN Multidimensional Integrated Stabilization Mission in Mali (MINUSMA) is achieving its current strategic objectives, and the impact the Mission has had on the political and security situation in Mali.
Until 2016 MINUSMA managed to strengthen stability in northern Mali, decreasing the number of civilians killed in the conflict, and allowing large numbers of displaced persons to return home. MINUSMA also assisted the peace process, culminating in the 2015 Algiers Agreement. Many of these achievements are still standing. However, since 2016 MINUSMA’s effectiveness in terms of stabilisation and the protection of civilians has decreased. In the North, the signatory parties have been making slow progress in the implementation of the Algiers Agreement and the 2018 Pact for Peace. In addition, central Mali has destabilised significantly, as Jihadist activities have stoked a vicious cycle of inter-communal violence that has reached unprecedented levels. MINUSMA has only been mandated to help the Malian government address the situation since June 2018.
As one of the largest multidimensional peacekeeping operations – currently including nearly 13,000 soldiers and 1,800 police officers from 57 contributing countries, and almost 750 civilians – MINUSMA has been provided with significant resources and an extraordinarily ambitious mandate. However, the Mission finds itself at a crossroads. It needs time to succeed, but this is valuable time Mali does not have. Civilians have come under increasing attack, and the US, in particular, is losing interest in supporting a costly UN peace operation that is not able to deliver quick results.
This report considers the degree to which there is an alignment between the mission’s resources and its mandate. It also makes an assessment of the
options available to the Mission to increase its effectiveness in the face of extremely challenging circumstances.