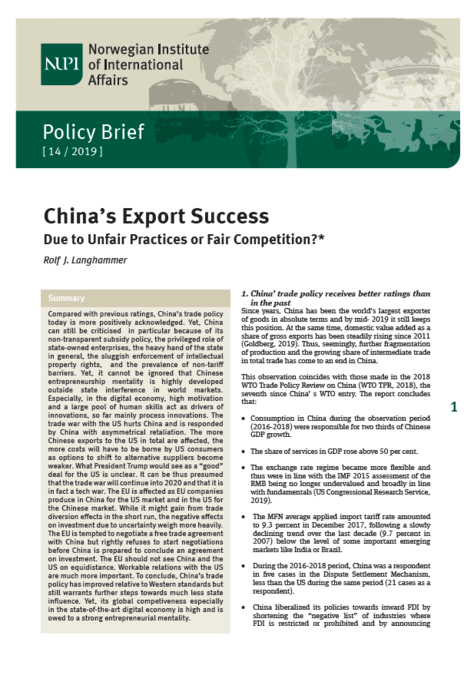 Compared with previous ratings, China’s trade policy today is more positively acknowledged. Yet, China can still be criticised in particular because of its non-transparent subsidy policy, the privileged role of state-owned enterprises, the heavy hand of the state in general, the sluggish enforcement of intellectual property rights, and the prevalence of non-tariff barriers. Yet, it cannot be ignored that Chinese entrepreneurship mentality is highly developed outside state interference in world markets. Especially, in the digital economy, high motivation and a large pool of human skills act as drivers of innovations, so far mainly process innovations. The trade war with the US hurts China and is responded by China with asymmetrical retaliation. The more Chinese exports to the US in total are affected, the more costs will have to be borne by US consumers as options to shift to alternative suppliers become weaker. What President Trump would see as a “good” deal for the US is unclear. It can be thus presumed that the trade war will continue into 2020 and that it is in fact a tech war. The EU is affected as EU companies produce in China for the US market and in the US for the Chinese market. While it might gain from trade diversion effects in the short run, the negative effects on investment due to uncertainty weigh more heavily. The EU is tempted to negotiate a free trade agreement with China but rightly refuses to start negotiations before China is prepared to conclude an agreement on investment. The EU should not see China and the US on equidistance. Workable relations with the US are much more important. To conclude, China’s trade policy has improved relative to Western standards but still warrants further steps towards much less state influence. Yet, its global competiveness especially in the state-of-the-art digital economy is high and is owed to a strong entrepreneurial mentality.