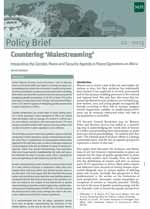 United Nations Security Council Resolution 1325 on Women, Peace and Security (2000) was hailed as a pioneering step in acknowledging the varied roles of women in conflict and promoting their participation in peace processes and in peace-building. Both before and after this resolution there has been pressure for integrating gender perspectives in all UN activities.

This brief takes up some of the more qualitative aspects of gender perspectives in these operations: gender mainstreaming and gender units. There is a potential for ensuring gender-mainstreamed approaches through these units, as well as challenges entailed by creating separate units that are de facto ‘in charge of’ gender perspectives. Rather than gender-mainstreaming, these operations often tend toward gender malestreaming: the male and masculine dominate the areas of security sector reform, including the army, strengthening of state institutions and rule of law.

Gender mainstreaming is often viewed as a process that should fit in with existing structures or institutions, rather than challenging these structures which have ignored gender issues in the first place. This brief argues that the masculine discourses within such institutions (army and other state-building aspects), combined with the dilemmas of insecurity in the operative context, are central to the analysis of and bottlenecks to gender mainstreaming and gender-sensitive approaches. Gender mainstreaming and implementation of UNSC Res. 1325 will remain at the rhetorical level unless major changes are made in the masculine, militarized architecture of peace operations.

It is recommended that the UN peace operations devote more time to gender mainstreaming the institution of the United Nations, as this may be the first step towards reform.