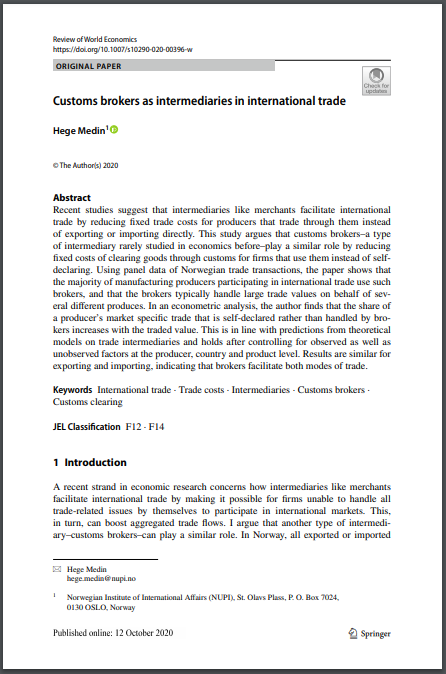 Recent studies suggest that intermediaries like merchants facilitate international trade by reducing fixed trade costs for producers that trade through them instead of exporting or importing directly. This study argues that customs brokers–a type of intermediary rarely studied in economics before–play a similar role by reducing fixed costs of clearing goods through customs for firms that use them instead of self-declaring. Using panel data of Norwegian trade transactions, the paper shows that the majority of manufacturing producers participating in international trade use such brokers, and that the brokers typically handle large trade values on behalf of several different produces. In an econometric analysis, the author finds that the share of a producer’s market specific trade that is self-declared rather than handled by brokers increases with the traded value. This is in line with predictions from theoretical models on trade intermediaries and holds after controlling for observed as well as unobserved factors at the producer, country and product level. Results are similar for exporting and importing, indicating that brokers facilitate both modes of trade.