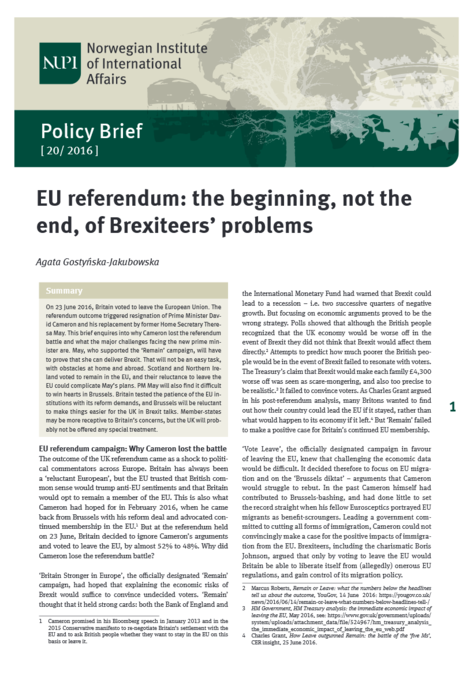 EU referendum: the beginning, not the end, of Brexiteers’ problems

On 23 June 2016, Britain voted to leave the European Union. The referendum outcome triggered resignation of Prime Minister David Cameron and his replacement by former Home Secretary Theresa May. This brief enquires into why Cameron lost the referendum battle and what the major challenges facing the new prime minister are. May, who supported the ‘Remain’ campaign, will have to prove that she can deliver Brexit. That will not be an easy task, with obstacles at home and abroad. Scotland and Northern Ire-land voted to remain in the EU, and their reluctance to leave the EU could complicate May’s plans. PM May will also find it difficult to win hearts in Brussels. Britain tested the patience of the EU institutions with its reform demands, and Brussels will be reluctant to make things easier for the UK in Brexit talks. Member-states may be more receptive to Britain’s concerns, but the UK will prob-ably not be offered any special treatment.