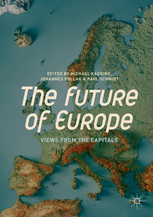 Book title: The Future of Europe : Views from the Capitals

What would the late political economist and intellectual Albert O. Hirschmann have said if asked to assess the developments in Europe – and its future – at a time when decision makers and voters feel that the quality of their community is decreasing, or fail to see the benefits of its achievements? Drawing on Hirschmann’s works, NUPI Director Ulf Sverdrup offers three intertwined strategies for European states’ approach to Europe in the time to come: “Exit”, “voice” and “loyalty”.

Sverdrup reminds us that most would agree that being European is something more than being a EU citizen. According to him, there are good reasons to believe that non-members, like Norway, can contribute to developing Europe in the future. However, a common challenge for both outsiders and insiders is to recognize the multifaceted nature of Europe, and to encourage non-members not to disengage from Europe while, at the same time, encouraging the EU to relate to its European partners outside the EU.