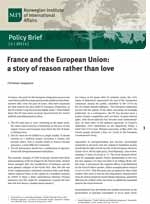 France and the European Union: a story of reason rather than love

In France, the push for the European integration process has come historically for a large part from the political and administrative elite. Over the past 60 years, they have expressed not only interest but also belief in European integration, as the US scholar Craig Parsons has rightly noted. Three beliefs about the EU have been recurrent fundamentals for French political and administrative elites:
1. The EU must have a ‘core’ consisting in the major member states which exercise a leadership on the rest. In this regard, France and Germany must share the role of motor or driving force.
2. The EU must not be limited to a single market. It should develop as a political project including a foreign and security policy. This is usually called in France l’Europe puissance, a term difficult to translate.
3. The EU governance should be a combination of supranational and intergovernmental institutions