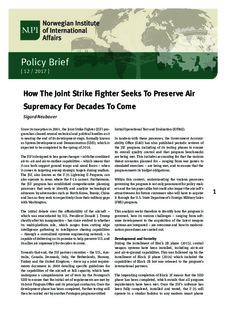 Since its inception in 2001, the Joint Strike Fighter (JSF) program has cleared several technical and political hurdles as it is nearing the end of its development stage, formally known as System Development and Demonstration (SDD), which is expected to be completed in the spring of 2018. The JSF is designed to be a game changer – with the combined air-to- air and air-to-surface capabilities – which means that it can both support ground troops and naval forces – when it comes to targeting enemy strategic targets during warfare. The JSF, also known as the F-35 Lightning II Program, can also operate in areas where the F-16 cannot. Furthermore, the JSF program has established comprehensive planning processes that seek to identify and analyze technological advances by adversaries such as North Korea, Russia, China and Iran as they seek to respectively close their military gaps with Washington.