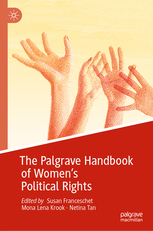 This chapter provides a review of the role of women in Indian politics, with a focus on female legislators. It begins with an account of the entry of women into politics in the early 20th century. Second, it looks at the gradual increase in the number of women MPs and the barriers they have faced. The third section presents the debate that resulted in quotas (‘reservations’) for women in local-level politics, but not in the more influential parliament and state assemblies. The final section is about some characteristics of women MPs. This review demonstrates some of the key barriers that keep women out of elected office in India, but also highlights the diversity of the women who have come to power despite these obstacles.