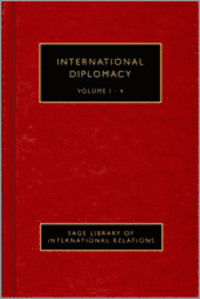 Following on from where 2004's widely acclaimed three-volume SAGE collection, Diplomacy (ed. Jonsson & Langhorne) left off, this new four-volume major work takes a new look at a subject which has matured and developed significantly over the past decade. With the rise of India, China and Brazil as well as of the global south, diplomacy's history looks different. Significant shifts have prompted scholars in the field to reconsider the historical sequences that are relevant to an understanding of what diplomacy is today, and where it may be heading. Increased mediazation of global politics and diplomacy has prompted an exponential growth in literature on public diplomacy.

This collection has been carefully structured so that each volume gives the reader an overview of the literature on a new area of development in the study of diplomacy: