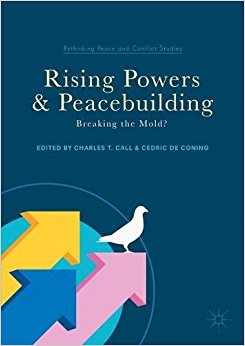 Over the last decade several setbacks in places like Burundi, Libya, South Sudan and Yemen, to name a few, have significantly eroded the prominence that peacebuilding enjoyed in the international system. The failure of peacebuilding to deliver sustained peace has combined with a push from rising powers against Western dominance, to produce a turn to the Global South as a source for more legitimate and effective responses to mass organized violence in the world. Onto this stage new actors like the BRICS (Brazil, Russia, India, China and South Africa) and several other prominent regional powers in the Global South, like Indonesia and Turkey, have emerged as new ‘donors’ that advance their own political and technical approaches to peacebuilding. The entry of the rising powers into the peacebuilding field are likely to have significant implications for how the UN and other international and regional organisations, as well as both the traditional donors and the recipient countries view peacebuilding in the future. Their entry may fundamentally alter how we understand and undertake peacebuilding a decade or more from now. With this book, we seek to answer the following central question: What exactly is new and innovative about the peacebuilding approach of the rising powers from the Global South, and what are the implications of these new approaches for peacebuilding? In this introductory chapter, we explain why this question is important, and how we have gone about answering it in the book. The introduction thus give the reader an overview of the context, key research questions and the structure of the book.