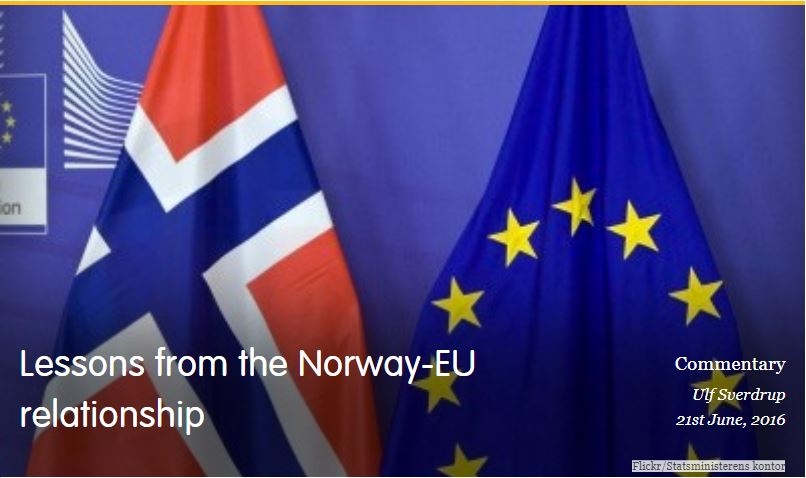 Lessons from the Norway-EU relationship

Whichever way the British vote in June, they should not believe that a vote to leave is a vote to become another Norway in Europe. In June, British voters will decide what the United Kingdom's future relationship to the European Union will be. The decision is critical for the UK, for the future of the EU, and for the future of the transatlantic relationship. The alternatives to EU membership remain unclear, despite their significance for making an informed choice. Few suggest that the UK should seek an association with the EU like that of countries on the fringes of Europe, such as Turkey, Ukraine or Morocco. Instead, references are frequently made to Norway - notably by the “Leave” campaign - as the epitome of a prosperous European country existing outside the EU. Norway is not a member of the EU, but is closely linked to it through the European Economic Area (EEA) agreement. For its part, the EU has also referred to its relationship with Norway as an attractive model for developing future ties with its neighbours. In 2014 the Council of the European Union stated that a precondition for non-member states that want close integration with the EU is the establishment of an EEA-like common institutional framework to ensure homogeneity and legal certainty. There are therefore good reasons to look more closely into the true nature of the Norwegian option, and its relevance for the UK. In 2012 I was involved in an extensive review of the Norwegian model. The findings of that report indicate that it is not a suitable model for the UK, and that many in the UK seem not to understand its true nature. Here are some lessons to be learnt from the Norwegian case: Our report concluded that European integration had been beneficial for the Norwegian economy and helped it to modernise and stay competitive. As such, the conclusions from the Norwegian report are very similar to the results of the extensive UK balance of competence review. As a member of the EEA, Norway is integrated into the single market, meaning that it also guarantees free movement of people. However, the nature of the country’s cooperation stretches well beyond the single market, and covers free movement of goods, capital and services, environmental protection, state aid, research, and public procurement. Norway’s integration with the EU began in 1994, and numerous additional agreements have since been concluded, in the areas of border, migration, police, defence, security and climate. A separate EFTA Surveillance Authority and an EFTA Court have the task of monitoring and ensuring compliance in Norway, much like the European Commission and the European Court of Justice do for the member states. In the case of Switzerland, there is no such third party independent court system, and the EU is insisting on the need to establish one. We estimated that Norway complies with some three-quarters of all EU laws and policies. As a result, Norwegian society has gradually become Europeanised, in a very similar way to EU member states. In short, Norway is more inside than outside the EU. In some areas, like Schengen cooperation, it is even more substantively integrated than the UK. Even in areas such as the agriculture and fishery policy, that were initially supposed to be outside of the scope of the agreements, there has been considerable integration. Some members of the UK’s “Vote Leave” campaign group frequently mention that the UK’s contribution to the EU’s coffers might be better spent on the NHS. When citing the possibility of adopting a “Norwegian model” one should be aware that Norway’s association with the EU does not come free of charge. ...(see hyperlink for more)