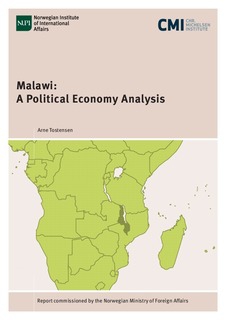 This report provides a comprehensive political economy analysis of contemporary Malawi. The country epitomises the primacy of patrimonial politics – including endemic corruption – with a powerful presidency at the helm and a weak legislature, although with a largely independent judiciary. Political parties, barely distinguishable in terms of policies and ideology, are dominated by strong personalities whose regional and ethnic provenance influence voter preferences. Political clientelism, characterised by informal decision-making, trumps sound economic policy formulation and implementation, despite purported efforts to reform and build institutions based on legal-rational Weberian principles. This inhibits long-term transformation of the ailing agrarian economy vulnerable to climate change. The report recounts salient features of social sectors such as education and health, and highlights the burden posed by high population growth rates on resources and social services. Improvements have been noted in civil and political rights but less in economic and social rights owing largely to the fact that half the population live in poverty. Apart from social and electoral cleavages, Malawi exhibits no serious domestic conflicts. A dispute with Tanzania over the northern part of Lake Malawi remains unresolved