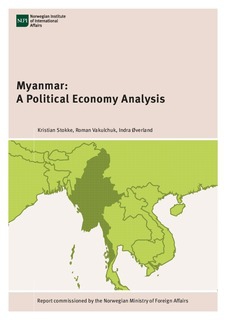 Myanmar may for a long time remain in a transitional state with an uncertain future. After a series of political and economic liberalization reforms from 2011 onwards, Myanmar’s political trajectory remains open-ended, although the most plausible scenario remains a continued slow democratization process. The democratic opening has been driven largely by the interest of the military rulers in changing Myanmar’s relations with Western states and thereby gaining leverage vis-à-vis China. Continued military influence, persistent capacity problems in political parties and parliamentary politics, weak channels of political representation and limited administrative capacity give rise to critical questions about the substance of democratization and economic development in Myanmar. The country’s informal economy is one of the largest in the world and is upheld by informal elite pacts that were formed in the military era, often involving high-ranking officers and crony companies. Along with a high level of corruption and lack of redistributive mechanisms the continuing cronyism hinders inclusive growth. If these economic structures persist, social and ethnic conflicts may intensify and progress towards further democratization stall. Despite this, foreign direct investments in resource extraction and other sectors have been on the rise since 2011 and are likely to continue. Myanmar is also ranked as the world’s second-most vulnerable country to climate change. The government needs a better understanding of climate change and its effects – both its direct impacts on Myanmar and its indirect impacts via neighbouring countries such as Bangladesh. As Myanmar remains at a crossroads, smart external assistance may have greater long-term impact in Myanmar than in other recipient countries where the situation is less volatile. However, donors may also become increasingly frustrated and reduce their assistance because of the ongoing Rohingya crisis and because of the limited local capacity to absorb international assistance.