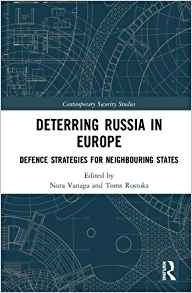 Norway: NATO in the North?

When the NATO allies agreed to deploy troops to the Baltic states and Poland in 2014 to deter against potential Russian aggression, Norway did not ask for a similar arrangement. Despite bordering the heavily militarised Kola peninsula, Norway is now the only NATO country neighbouring Russia without a permanent allied presence. Why is this so? The chapter discusses the background for this policy, which often is summarised in the claim ‘Norway is NATO in the North’, and question if Norway really is NATO in the North in terms of deterrence. The chapter then discuss current Norwegian threat perceptions and various security policy orientations that may contradict each other. For instance, Norway seeks to signal peacetime control and situational awareness of the High North to the rest of NATO, but also to attract allies to training and exercises. Furthermore, Norway seeks to signal both deterrence and restraint, as well as reassurance, to Russia. These different security policies, the chapter argues, may not always be easily combined into a coherent policy.