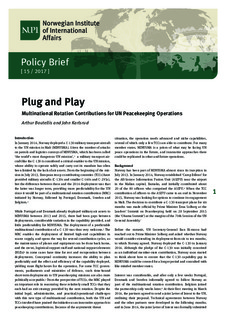 In January 2016, Norway deployed a C-130 military transport aircraft to the UN mission in Mali (MINUSMA). Given the number of attacks on patrols and logistics convoys of MINUSMA, which has been called ‘the world’s most dangerous UN mission’, a military transport aircraft like the C-130 is considered a critical enabler to the UN mission, whose ability to operate safely and carry out its mandate has often been limited by the lack of air assets. From the beginning of the mission in July 2013, European troop-contributing countries (TCCs) have provided military aircrafts (C-130s and smaller C-160s and C-295s), but the difference between these and the 2016 deployment was that the latter was longer term, providing more predictability for the UN since it would be part of a multinational rotation contribution (MRC) initiated by Norway, followed by Portugal, Denmark, Sweden and Belgium.