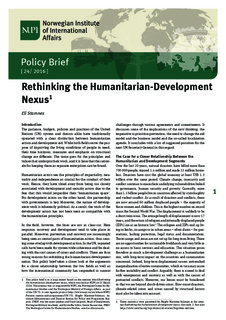 In this policy brief, the author outlines the first steps taken in the rethinking of the humanitarian-development nexus. The next Secretary-General would be advised to continue on the same path in order to make sure that the recent commitments made by member states and expressed in various documents are realised. The author sums up five areas the next Secretary-General should prioritize. This policy brief is to a large extent based on the seminar titled Rethinking the humanitarian-development nexus, which was held at NUPI on 15 March 2016. The seminar was co-organised by NUPI, the Norwegian Centre for Humanitarian Studies and the Norwegian Ministry of Foreign Affairs, as part of the UN 70: A new Agenda project.