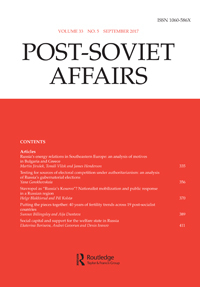 Stavropol as "Russia's Kosovo"? Nationalist mobilization and public response in a Russian region

Russian nationalism after Crimea is commonly depicted as aggressive and expansionist – but few Russian ethno-nationalists would accept this description. Quite the contrary: they would argue that ethnic Russians as the majority population find themselves under “under siege” from ethnic minorities. A case in point, they hold, is Stavropol Krai in the North Caucasus. In local ethno-nationalist circles this region is depicted as “Russia’s Kosovo,” a glaring example of the Kremlin’s betrayal of ethnic Russian interests. This article presents a case study of the under-researched regional dimension of Russian nationalism. The purpose is twofold: to map regional ethno-nationalist discourse and, drawing on survey data, to explore to what extent this discourse is reflected in general attitudes toward the influx of migrants and plans for own migration. We find that local ethno-nationalists have succeeded in mobilizing support at the national level, but that, despite increased ethnic tensions in Stavropol Krai, few Russians contemplate leaving.