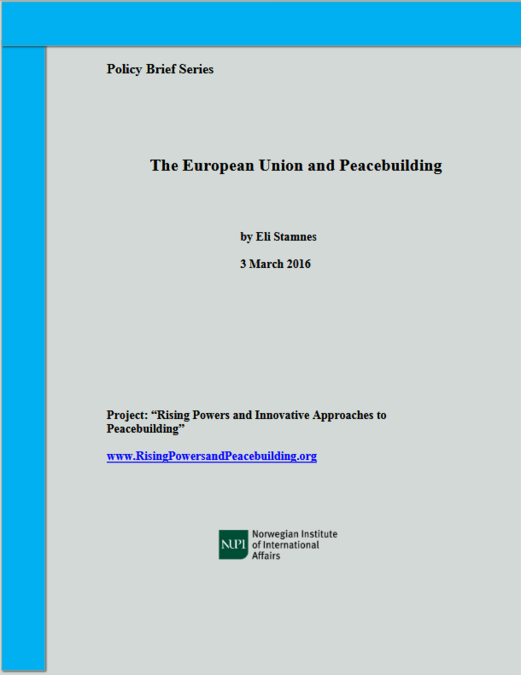 The Rising Powers and Peacebuilding project seeks to address an important question that has not yet been thoroughly researched: what are the new approaches that rising powers have taken to peacebuilding, how do they differ from those of traditional powers and multilateral institutions, and what lessons can be learned from these new approaches?The policy briefs in this series provide a baseline on the roles of rising powers and their affiliated regional organizations in peacebuilding. To this point, little research has been conducted on the substance and impact of peacebuilding activities carried out by rising powers. This project seeks to address this gap in the research by providing a structured, critical analysis of the values, content and impact of recent peacebuilding initiatives of rising powers, comparing them to one another and to approaches by Western donors and international organizations. The project also aims to offer new theoretical claims about the role of the global South in peacebuilding, rooted in insightful empirical work (on Somalia, Afghanistan and Myanmar and on specific non-¬‐Western actors), and to make key policy audiences aware of alternative approaches and their empirical records and theoretical underpinnings (which may vary among values, global/regional power aspirations, bureaucratic approaches).The project partners will also produce case studies on the role of rising powers in peacebuilding, and include:ACCORD (an NGO based in South Africa), the Istanbul Policy Center (IPC), , the United Service Institution of India (USI), American University’s School of International Service (SIS), CSIS-¬‐Jakarta, and the Norwegian Institute of International Affairs (NUPI). The project is funded by the Carnegie Corporation of New York, the Norwegian Ministry of Foreign Affairs, American University, and NUPI.