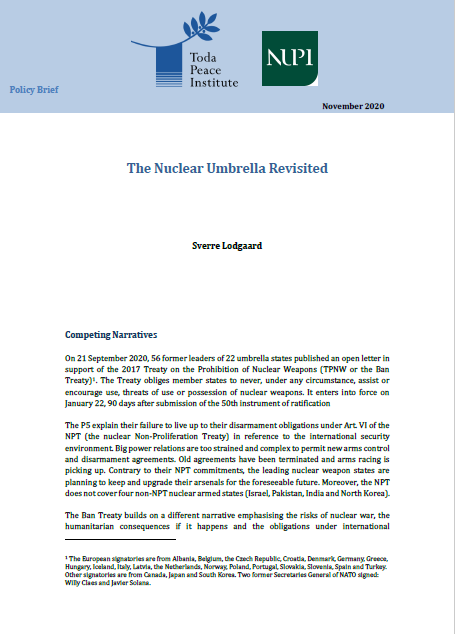 The NPT is in miserable shape, betrayed on the disarmament dimension, stuck in the Middle East and mostly irrelevant to the Asian nuclear armed states, but it has proven resilient and lingers on. It will soon be accompanied by the TPNW, which is about to enter into force. Hopefully, the wrangling between the respective treaty supporters will calm down and enable a new consensus on the normative basis for non-proliferation and disarmament consisting of a combination of both treaties. That will not happen overnight, however. There is a long way from mutual recriminations to passive co-existence to bridge-building to exploitation of synergies – if it ever happens.
The dilemma facing the umbrella states is a hard one. On the one hand, it is in their interest not to be defended with nuclear weapons. On the other hand, they deem it important to remain members of NATO. These propositions may or may not be compatible. Some believe they are, emphasising that the Alliance is a conglomerate of nuclear and non-nuclear states; of states that are hosting nuclear weapons and others which do not; and that France left the military part of NATO but remained part of the political cooperation without rocking the rest. Others claim they are not and note that in the face of big power pressure, small states tend to balk at running the risks involved – especially if they cannot agree to act together.
Business as usual is the problem, not the solution. In view of current trends in international security affairs there can be little disagreement about that. If so, much is achieved, because it encourages reflection and re-examination of established positions. If not, the strength of argument will remain posited against the power of inertia.