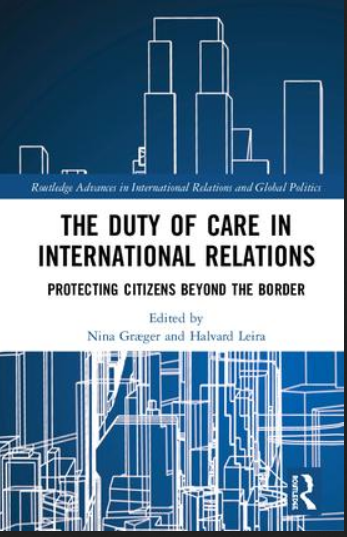 The Politics of Diasporas and the Duty of Care: Legitimizing interventions through the protection of kin

Book title: The Duty of Care in International Relations Protecting Citizens Beyond the Border

The duty of care (DoC) is largely portrayed as being of a benevolent and liberal character, with welfare states aiding its citizens abroad. In this chapter Holm examines a more complex phenomenon involving the DoC: that of a state and its diaspora.

Seeing Duty of Care in relation to diasporas poses a conceptual shift: often multinational in identification, with a perceived or real ‘homeland’, and at times with dual (legal) citizenship, diasporas may be sought protected under an extended, non-territorialized notion of belonging to a state’s citizenry.

Looking at Russian rhetoric in the Georgia war in 2008 and the Crimean annexation and Ukraine crisis in 2014, Holm explores how the Duty of Care can be evoked rhetorically to defend diaspora groups by kin-states. In relation to a domestic audience, this prism proves highly effective, as the state portrays its actions as defending ‘their’ people abroad out of a moral necessity and responsibility for their kin. It also functions to dismiss international stigma and critique at home based on a perceived higher moral purpose. As in the case of diasporas in inter-state conflicts with Georgia and Ukraine, this turns the Duty of Care into a complicated, and potentially highly politicized, international matter. It also provides a communitarian alternative to the cosmopolitan R2P: in theory, any group can be defined as worth defending as one’s own, across and despite opposing claims to sovereignty. The chapter concludes with discussing the wider ramifications of diaspora group protection by kin-states for challenges to the liberal international order.