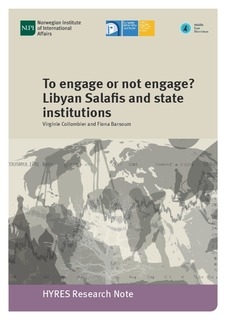 At the beginning of the recent escalation of hostilities in Libya in April 2019, one of the key questions posed was what role, if any, quietist Salafis would play. Followers of this trend have grown significantly in influence in recent years, including in the security sphere and government institutions. As a result, their decisions, especially those regarding military engagement, have the potential to have important consequences at the national level. The fact that these “quietist” Salafis in Libya are armed already poses interesting ideological questions. Moreover, the fact that their behaviour during the recent fighting in Tripoliihas been somewhat unpredictable indicates that their ideology of obedience to the sitting ruler requires further interrogation.This research brief looks at the way in which the quietist Salafis have evolved to gain such a strong position in Libya, assessing their behaviour in four distinct periods. It contrasts this behaviour with other Salafi trends in Libya, particularly the political Salafism associated with certain former leaders of the Libyan Islamic Fighting Group (LIFG). It argues that Libyan Salafis have adapted and renegotiated ideologies in the changing political context after 2011. More than pure ideology, the way in which they have responded to the constraints and opportunities created by this context has been the key factor in the evolution of the different groups and ultimately their fortunes.