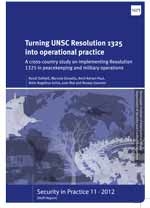 This report focuses on the integration of gender perspectives in four peacekeeping and military operations: Norwegian participation in the ISAF in Afghanistan (Maymaneh, Fayab province), and United Nations operations in Haiti (MINUSTAH), in South Kivu province of the Democratic Republic of Congo (MONUSCO), and in Liberia (UNMIL). UNSC Resolution 1325 (2000) is the first resolution ever passed by the Security Council that specifically addresses the impact of war on women, and women’s contribution to conflict resolution and sustainable peace. Although the adoption of the resolution marked a substantial achievement in international politics at the executive level, practical implementation of the content of this resolution and the follow-up resolutions 1820 (2008), 1888 (2009), 1889 (2009) and 1960 (2010) has proven more difficult. With reference to the standards listed in the UNSC resolutions two goals in particular seem difficult to achieve: (i) the integration of gender perspectives at all levels of military and peacekeeping interventions and operations, and (ii) the participation of women in the armed forces.

This report draws inspiration from the milestone report Operational Effectiveness and UN Resolution 1325 - Practices and Lessons from Afghanistan (Olsson & Tejpar, 2009). Olsson’s analytical framework (p. 20) for evaluating the representation and integration of Res. 1325 at the internal and external levels of a NATO-led and UN-led operation offers a meaningful approach to studies also beyond Afghanistan, and has been used in order to analyze the findings of this study.