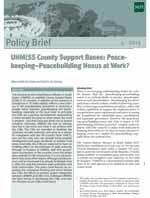 The initiative by the United Nations Mission in South Sudan (UNMISS) to establish County Support Bases (CSBs) in 35 counties, in addition to the presence it already has in 10 state capitals, reflects a new interest in UN peacekeeping operations in pursuing a greater nexus between peacekeeping and peacebuilding, especially at the local level. In principle, the CSBs are a positive development, representing a move towards focusing on areas where the need is greatest – but they have also given rise to several concerns. Internally, UNMISS has had to reassess how fast it can move and what it can achieve with the CSBs. The CSBs are intended to ‘facilitate the extension of state authority’, and serve as a vehicle for integration with the UN Country Team (UNCT), who are the ones who can actually bring tangible development and peace dividends to isolated rural areas. Externally, the CSBs are expected to have an enabling effect on the extension of state authority through co-location of UNMISS staff with government counterparts in the counties. Given the delays encountered in CSB construction, it is not yet possible to fully assess their impact, although partial presence and air movement has already facilitated what is often the only link between state authorities and rural communities. This policy brief focuses on exploring the conceptual thinking and vision behind the CSBs, the efforts to achieve greater integration between UNMISS and UNCT, the challenges UNMISS has been facing in developing the CSBs, and how the UN plans to use CSBs in the future.