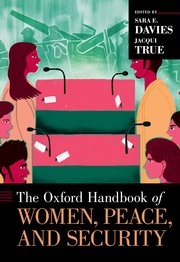 Book title: The Oxford Handbook of Women, Peace, and Security

The chapter provides an overview of the participation of female peacekeeping personnel in UN missions, tracing key target and agenda- setting policy events, as well as examining causes for the slow progress in female participation. The chapter considers female participation in the military, police, and civilian components of UN peacekeeping operations. It then critically discusses the drawbacks of the “gender- balancing” agenda advanced by the UN, which critics argue has often amounted to “tokenism.” This necessary, but insufficient goal of increasing numbers alone, has been prioritized over the more comprehensive and potentially transformative goal of gender mainstreaming. Gender mainstreaming in peacekeeping is defined as “a way of guaranteeing that the concerns, requirements and opinions of women and men are included equally into every aspect of peacekeeping.” Moreover, each component of the mission should include a “gender perspective in all its functions and tasks from start- up to draw- down” (United Nations 2014: 21– 22). Failing to address the complexity of gender relations and the militarized, masculine, institutional structures within peacekeeping missions themselves will ultimately constrain gender equality. Seeking to situate the WPS agenda within the broader context of UN peace operations, the chapter concludes by reflecting on some of the possible implications of the trend toward militarization and securitization within peacekeeping which will have consequences for women’s active and quality participation in peacekeeping.