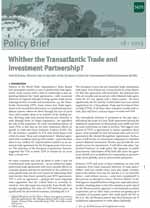 Whither the Transatlantic Trade and Investment Partnership?

Failures in the World Trade Organisation’s Doha Round have prompted countries to turn to preferential trade agreements. Every country with a stake in world trade is now negotiating bilateral free trade agreements – with occasional infusions of regional attempts to forge greater trade ties by reducing barriers to trade and investments, e.g. the Trans-Pacific Partnership (TPP). Some claims Free Trade Agreements to be second-best alternatives to a dysfunctional multilateral system; others see them through the eyes of Jacob Viner and consider them to be termites of the trading system, diverting trade and causing bureaucratic obstacles to trade through Rules of Origin regulations. Yet regardless the side of the argument, the most outstanding feature of many FTAs is that they do not have impressive effects on growth in trade and Gross Domestic Product (GDP). The EU, for instance, considers its FTA with South Korea to be a first-of-a-kind, “deep and comprehensive” bilateral agreement with a medium-sized growth market – and at the time when it was ratified, EU representatives hailed it as an important trade agreement for the European post-crisis recovery. The estimates of the European Commission, however, suggested this FTA to boost GDP in Europe by no more than 0.08 percent.