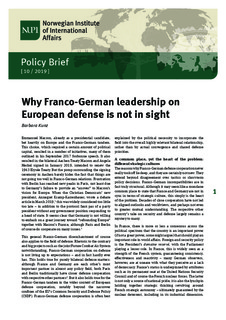 Why Franco-German leadership on European defense is not in sight

Emmanuel Macron, already as a presidential candidate, bet heavily on Europe and the Franco-German tandem. This choice, which required a certain amount of political capital, resulted in a number of initiatives, many of them outlined in his September 2017 Sorbonne speech. It also resulted in the bilateral Aachen Treaty Macron and Angela Merkel signed in January 2019, intended to renew the 1963 Elysée Treaty. But the pomp surrounding the signing ceremony in Aachen barely hides the fact that things are not going too well in Franco-German relations. Frustration with Berlin has reached new peaks in Paris, not least due to Germany’s failure to provide an “answer” to Macron’s vision for Europe. When the Christian Democrats’ new president, Annegret Kramp-Karrenbauer, wrote a debate article in March 2019,1 this was widely considered too little too late – in addition to the protocol faux pas of a party president without any government position responding to a head of state. It seems clear that Germany is not willing to embark on a great journey toward “refounding Europe” together with Macron’s France, although Paris and Berlin of course do cooperate on many issues.