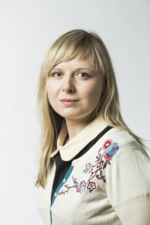 2009 MA of Sociology at the University of Oslo

Natalia Moen-Larsen is currently working on a PhD project in which she examines the discursive construction of ‘refugees’ in the Russian context.

Her analysis focuses on newspaper representations of refugees from Ukraine and refugees from Middle East and North Africa. It is possible to identify several different competing discourses that give meaning to the category “refugee”, these discourses define what it means to be a refugee, how refugees see themselves, and how Russians see them.

Moen-Larsen also does research on inter-ethnic tension and nationalism in Russia. She has published articles about the development and political use of new media (internet, blogosphere, social networks) in Russia and Russian female migrants in Norway. Other research areas are migration, culture, values, ethnic/national identities, nation building, patriotism and Russia’s demographic issues.

From 2015, Moen-Larsen is also a Doctoral Research Fellow at the Department of Sociology and Human Geography, University of Oslo.