Kosovo and the Western Balkans: towards democratic change?

Albin Kurti visits NUPI to talk about Kosovo and the political change in the country. 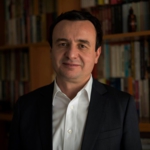 Member of the Assembly of Kosovo

The Western Balkans has long been a region where national, regional and great power interests have played themselves out in sometimes violent and usually unpredictable ways. Today, several unsettled border disputes add to the area’s volatility. Internationally, the Western Balkans have often been seen as a place where priorities of stability and democracy have come into conflict. Recently, however, elections in several of the Western Balkan countries may signify that things are about to change. This talk by Albin Kurti will present a perspective from Kosovo on these recent developments.

Albin Kurti is a member of Kosovo’s Assembly and was the opposition’s Prime Ministerial candidate at the June 2017 parliamentary elections which resulted in a still-unresolved political stalemate. He is a long-time critic of both the local and international leadership in Kosovo and a former leader of the country’s largest political party, Lëvizja Vetëvendosje.

This event is a part of the "Norway meets Europe"-series.