CANCELLED: Romania’s goal on a stronger and more cohesive EU

Due to unforeseen events we have to cancel this event. 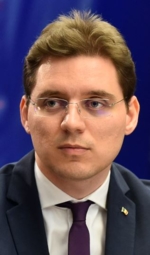 In a period when Europe is facing new and increasingly complex internal and external challenges, discussions on ways in which the EU should evolve are at the heart of the European agenda. Negotiations on a new EU budget, finalizing the BREXIT process, ways to promote jobs and growth for all, and mitigating the threats to the security of European citizens are just some of the key topics that European leaders are called to address in the reflection process on the future of the EU.

As future Presidency of the EU Council in the first half of 2019, Romania will have a central role in steering these discussions forward before the upcoming European elections in May next year. What are the best means to address these shared challenges and contribute to building a stronger and more cohesive Europe of tomorrow? What are Romania’s priorities during its Presidency of the EU Council? How can Romania contribute to a stronger and more united Europe?

This is what Victor Negrescu will discuss on 21 September. He is serving as the Minister Delegate for European Affairs since June 29, 2017. The upcoming Presidency of the Council of the European Union is one of the key points of his mandate as a minister. Negrescu is a former Member of the European Parliament (2014-2017). He was also the youngest Romanian MEP to get ever elected in the European Parliament and he was the youngest ever vice-president of the Social Democratic Party of Romania (PSD). He graduated from the Faculty of Political Science of the University of Bucharest, holds an MBA in executive business, a Master's degree of International and European Studies and a PhD in development cooperation.