The Greek Minister of Foreign Affairs visits NUPI to talk about the country’s foreign policy towards the EU and Greece's role in the region. This is a closed rountable. Participation by invitation only. 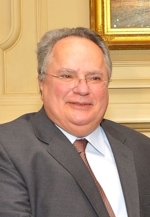 Nikos Kotzias studied Economics, Political Science and Philosophy, Law and European Integration in Greece and in Germany. He worked as a researcher and taught at the Universities of Marburg, Oxford and Harvard, and he holds the position of Professor of Political Theories and International and European Studies at the University of Piraeus. He has specialized in issues of policy and political systems, societies and foreign policy of Brazil, India and Russia. He has been a member of many globally recognized international research teams on contemporary issues.

Until 2008, he served as an Expert at the Foreign Ministry leaving with the rank of Expert-Ambassador. At the Foreign Ministry, he headed a number of research and planning teams. He served as a member of the first National Council on Foreign Policy. He has participated in many important negotiations, successfully defending and promoting Greece’s interests and positions.