How do the Russians view the confrontation with the West?

Lev Gudkov will give you an insight to the public opinion in Russia in 2018. 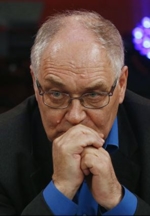 What do most Russians think about President Putin, the policies of the Kremlin and the West? Is Russia on the right track? How do Russians view the future? President Vladimir Putin has, since he was elected in 2000, scored high in public opinion polls. After the Russian annexation of Crimea in 2014 the polls reached new heights with support from nearly 90 % of the population. However, after the announcement of a comprehensive pension reform in summer 2018, the support has decreased.

On 31 October, Lev Gudkov is coming to NUPI to provide an overview of how the Russians see the West, Ukraine and the politics of the Kremlin, and how the public opinion on these issues have changed over time. The presentation is based on the regular public opinion polls carried out by the Levada Centre since 2003.

Lev Gudkov is a sociologist and Director of the analytical Levada Centre, which since 2003 has carried out public opinion polls in Russia. He is also Professor at the Higher School of Economics in Moscow and an active public speaker.

Senior Research Fellow at NUPI Helge Blakkisrud will chair the event. The seminar will be translated from Russian to English and live streamed on NUPI's YouTube channel: