Russian foreign policy as a tool for domestic mobilization

Irina Busygina is visiting NUPI to talk about Russian foreign policy and how it affects domestic change. 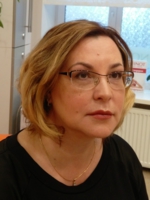 While making numerous declarations about the need for economic modernization, Russian authorities have in recent years showed very few signs of wanting to implement domestic reforms. Russia’s external policy, on the other hand, is very active, and is extensively debated within Russia itself.

Professor Irina Busygina has researched the links between Russian foreign policy and the prospects for a domestic change. She argues that on the surface, it looks like the domestic agenda is fully suppressed by the external one. “In today’s Russia, foreign policy plays an important instrumental role: it is the main tool for domestic mobilization. Several strategies of domestic reforms have been elaborated by the order of the President, but the emphasis on international affairs allows the political elites to redirect public attention and thus to postpone necessary reforms”.

Irina Busygina is a professor at the Department of Applied Politics, the National Research University – Higher School of Economics, St Petersburg, Russia