Theory Seminar: The prospects for Chinese leadership in an age of upheaval

Time: 13:15 Location: NUPI Language: English Available seats: 7
Add to calendar 18-10-26 13:15 18-10-26 15:00 38 Theory Seminar: The prospects for Chinese leadership in an age of upheaval Srdjan Vucetic will discuss his latest paper on China’s possibilities in a time where the relationship between the West and USA is more uncertain than before. NUPI NUPI seminar@nupi.no http://www.facebook.com/events/160427380695693 false DD/MM/YYYY
I want to register for the following event:

Srdjan Vucetic will discuss his latest paper on China’s possibilities in a time where the relationship between the West and USA is more uncertain than before. 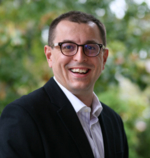 This is what Srdjan Vucetic and his collaborators question based on their latest paper “The Distribution of Identity and the Future of International Order: China's Hegemonic Prospects” On 26 October he will visit NUPI to discuss this.

Srdjan Vucetic is Associate Professor at the Graduate School of Public and International Affairs (GSPIA-ÉSAPI), University of Ottawa. His Research interests are international politics, including foreign and defence policy, identity, arms trade, and the Yugoslav region.