The Zelensky phenomenon: From where did it come and where will it lead

Adrian Karatnycky will give a talk about Volodymyr Zelensky, the Ukrainian comedian-turned-president, and how his electoral triumph was possible. 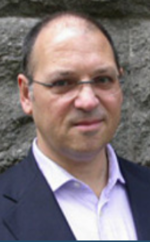 Volodymyr Zelensky's rapid ascent from satirist and comedian to president of a strategically important country, Ukraine, is one of the most remarkable developments in the history of post-Soviet Europe. How and why did Zelensky emerge? What were the forces that drew him to the apex of power in war-ravaged Ukraine? And in what direction is he likely to lead a crucial state facing challenges of reform amid external aggression?

Adrian Karatnycky is a Senior Fellow at the Atlantic Council of the United States, and the former President of Freedom House. He is also the former co-director of the Council on Foreign Relations Task Force on the US and the United Nations. Karatnycky has co-authored and edited over twenty books about the post-Communist countries and their reforms, and writes regularly for Foreign Affairs, the Washington Post, Newsweek and the Wall Street Journal.