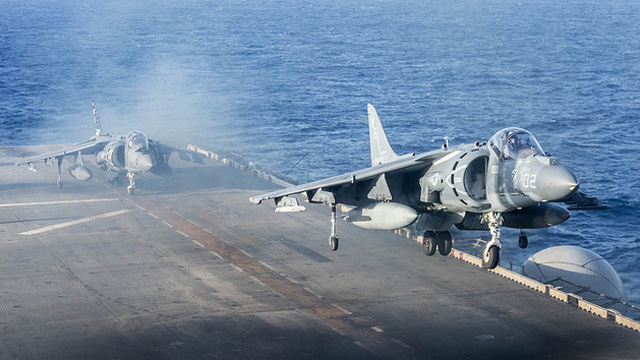 TENSION: The first half of 2016 has been marked by a steady increase in diplomatic disputes, and at times tensions, over maritime security in East Asia, specifically in the East and South China Seas.

China and the Philippines: Sea of Troubles?

It is shaping up to be a difficult summer ahead in the South China Sea, as the security situation in the region becomes more complex and potentially more dangerous. The South China Sea, which is a key transit corridor for Asian shipping as well as a major source of fish and seafood and potentially holds significant quantities of fossil fuels, has been the subject of sovereignty disputes for many decades, but these arguments have become more acute in recent years.

The government of China has argued that the majority of the South China Sea is its historical waters dating back centuries, and illustrated by a ‘nine-dashed line’ demarcating the Sea on official Chinese maps. However, some of China’s southern neighbours, especially the Philippines and Vietnam, have not recognized this claim.

As a result, there has been a growing number of maritime incidents involving the three countries. Adding to the difficulty of this issue are small island and reef groups in the South China Sea which the three states, along with other governments such as Brunei, Malaysia and Taiwan, have claimed. Since early 2015, China has been engaged in the building up of some reefs in the South China Sea in order to transform them into small islets, thus bolstering Chinese claims.

The practice has drawn criticism from other claimants as well as the United States, which has recently engaged in over-flights as well ‘freedom of navigation operations’ by US Navy vessels in the disputed zones.

Although there have been serious incidents in the region involving China and Vietnam, including the temporary placement by China of a floating oil rig in waters also claimed by Hanoi in mid-2014, it has been the dispute between China and the Philippines which has since become the main potential flashpoint in the waterway.

In April 2012, a standoff between Chinese and Philippine vessels in the area around the Scarborough Shoal, a triangle-shaped reef claimed by both governments, resulted in China assuming control over the region over the protests of Manila.

The reef, known in China as Huangyan Island and in the Philippines as the Panatag Shoal, rests about 220 kilometres from the Philippines and is uninhabited, with much of the reef submerged. Beijing classifies the Scarborough Shoal as part of a larger archipelago, collectively called ‘ZhongshaQundao’, (or the Macclesfield Bank in English), within the northern part of the South China Sea, and under Chinese sovereignty dated at least as far back as the Yuan Dynasty of the thirteenth and fourteenth centuries.

In the wake of the 2012 incident, the government of the Philippines brought the dispute to the Permanent Court of Arbitration in The Hague in January of the following year in order to clarify sovereignty in the contested areas of the South China Sea under the auspices of the UN Convention on the Law of the Sea. Beijing strongly condemned the move, arguing that the Philippines had no right to bring the dispute to an international mediator, and declined to participate in the proceedings.

In October 2015, the Permanent Court issued a preliminary statement confirming that it was competent to rule on at least some of the submissions made by the Philippines.

The final verdict by the Permanent Court is expected by July 12, and it is assumed that Manila would receive at least a partial victory in the final ruling.

However, Beijing has viewed the court case as political grandstanding, while stating that it would not recognize the verdict, and has maintained that bilateral talks are the better solution to resolving the standoff.

The United States, which has maintained a mutual defence treaty with the Philippines since 1951, has also been critical of Chinese actions in the South China Sea, and this week the US reported a near miss between an American surveillance plane and two Chinese air force jets in the region.

Washington is also concerned that China would seek to build up Scarborough Shoal as it has with other reefs, perhaps as a precursor to adding infrastructure along the same lines as other disputed islets like Fiery Cross Reef, upon which China built a runway and other installations. The US has also suggested that Beijing may be preparing to declare an Air Defense Identification Zone (ADIZ) in the South China Sea similar in form to the one Beijing implemented in the East China Sea in late 2013.

Japan, which has its own set of maritime disputes with China, has also waded into the dispute, signing a defence agreement with Manila in March of this year, reflecting Japanese concerns over conflicts in this important sea-lane. At the recently concluded Shangri-La Dialogue on regional security in Singapore, Admiral Sun Jianguo of the Chinese Navy defended his country’s position in the South China Sea, adding that ‘we do not make trouble, but we have no fear of trouble’. Underscoring this sentiment, it was announced this week by Beijing that military drills will be held in the South China in the lead-up the Court’s decision.

As the region waits for the verdict, the incoming Philippine government of Rodrigo Duterte has hinted that he would be amenable to direct talks with Beijing on the South China Sea, possibly in exchange for economic concessions. However, with the immanent Court verdict and the United States and China still on opposite sides of the dispute over the sovereignty of the South China Sea, it remains to be seen whether a cooling off period is possible this summer.

This op-ed was first published in Klassekampen July 6, 2016: 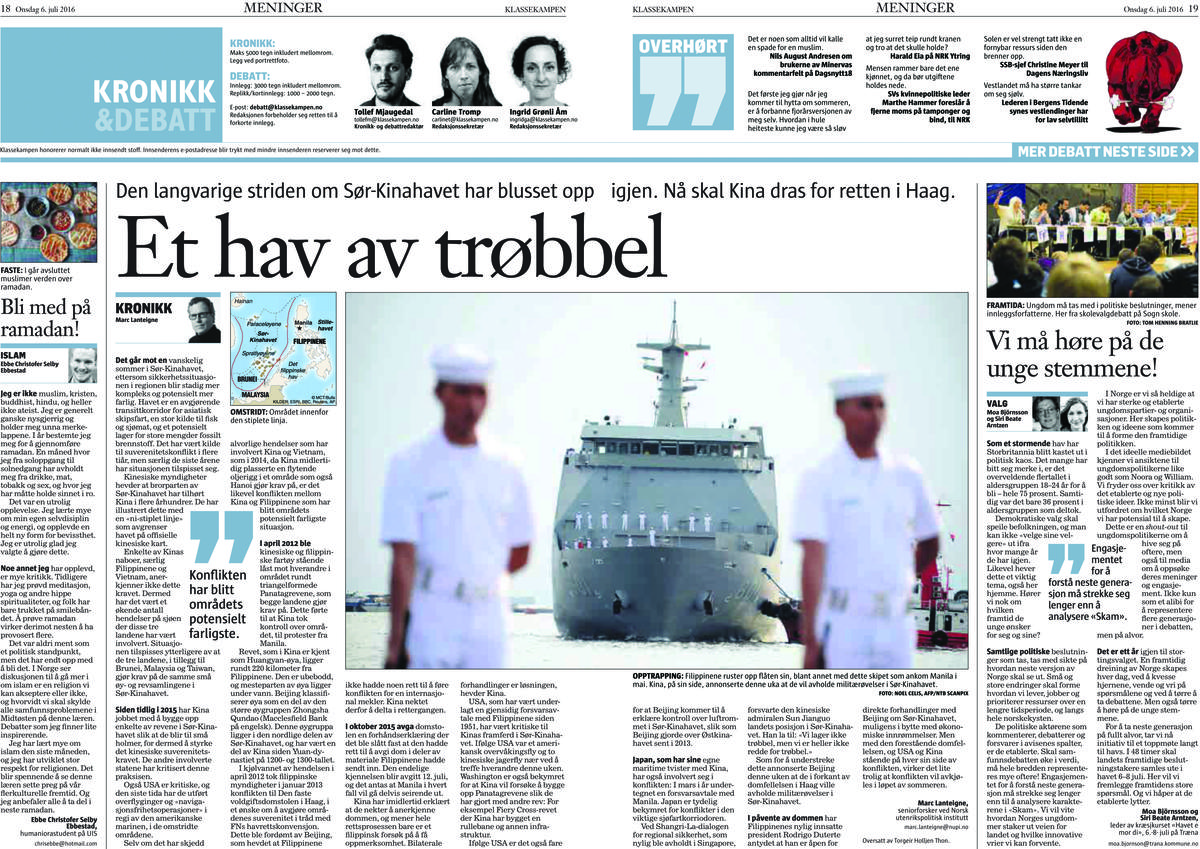