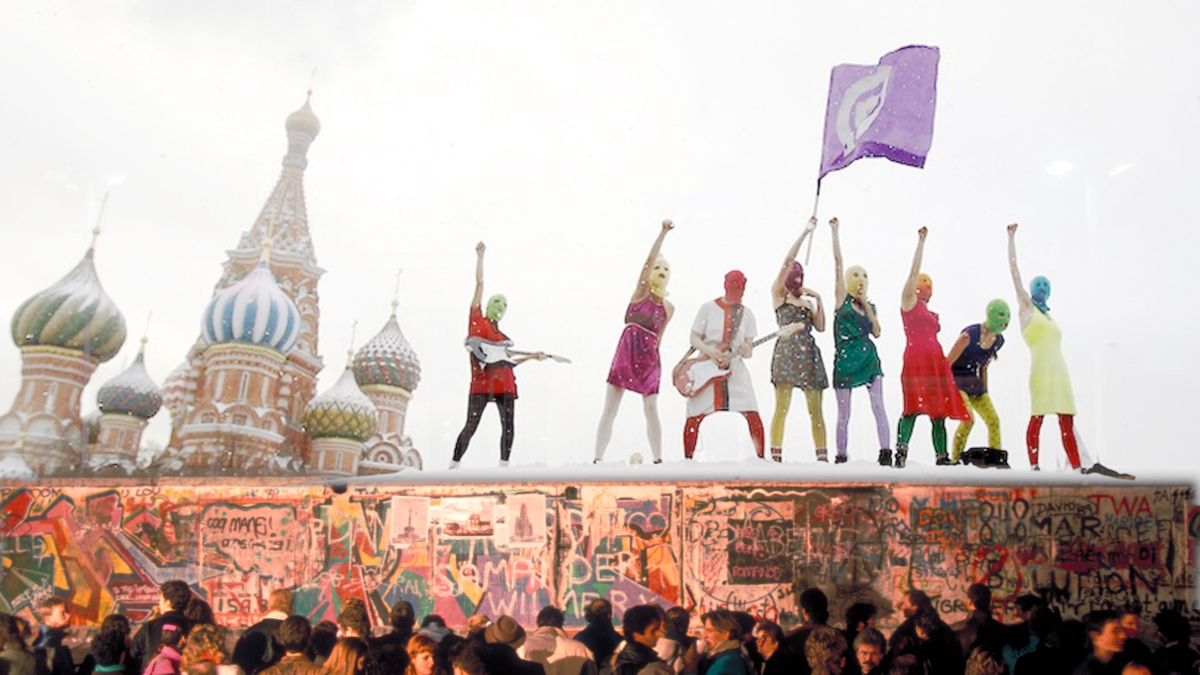 CONSTRAINED FREEDOM: Russia is placed in the unflattering category "non-free states" in Freedom House's latest index of global freedom, with only 20 of 100 possible points in the ranking. The image shows punk rock band Pussy Riot performing. The members have been arrested on several occasions after protesting in Russia.

Global freedom has declined for the 11th consecutive year, according to Freedom House’s recent report. Norway is in the lead, but also faces challenges, according to Senior Advisor Joachim Nahem at NUPI.

Donald Trump has been elected President of the USA and in Turkey President Recep Tayyip Erdoğan has tightened his grip on freedom of speech by imprisoning journalists, closing down hundreds of media outlets and NGOs, and firing over 100 000 public servants. Marine Le Pen appears to have good chances of winning this spring’s presidential elections in France, and Poland is governed by the populist party, Law and Justice (PiS).

In 2016, populist and nationalist political forces made surprising gains in democratic countries, notes the US-based NGO Freedom House in its latest report on global freedom, disturbingly titled Populists and Autocrats: The Dual Threat to Global Democracy.

A large pool of experts has contributed analyses of human rights and freedom of speech in the world’s countries and territories.

‘We have strong, independent institutions which can exert a corrective effect if the government should attempt to limit freedoms. Also important are the media and civil society – the watchdog role remains powerful in Scandinavia. In Great Britain and USA, however, we have seen highly unfortunate media realities, characterized by serious conflicts, polarization and “alternative facts”’.

‘Traditionally, established democracies have always been found in the green category. But there are grey areas within each category as well. France, Poland, South Africa, South Korea and Brazil score worse this year than in the previous report, but they remain in the green category. Even though the Nordics’ score is stable, Norway faces challenges in two areas’, Nahem continues.

‘One area relates to freedom of speech versus protection of minorities, which has become a greater challenge for the courts and politicians in the Scandinavian countries. There have been several examples of this. Last year, we had the first Norwegian court case where a private individual was convicted because of hate speech on Facebook, for example.’

The other challenging area is migration and asylum policy.

‘The UN and experts, among others, have expressed criticism of how Norway, Finland and Sweden have been dealing with the refugee crisis,’ Nahem points out.

This latest report marks the 11th consecutive year of Freedom House reporting a decline in global freedom. In 2016, much of the decline was due to nationalist and populistic forces gaining foothold in democratic countries.

‘This is definitely a frightening development,’ Nahem says, and continues:

‘For those who believed that all this happened over night, the 2016 report may come as a brutal awakening, showing a world where democratic mechanisms and values suddenly no longer work. In fact, these developments have been underway for years now –the populistic as well as the authoritarian trends.’ 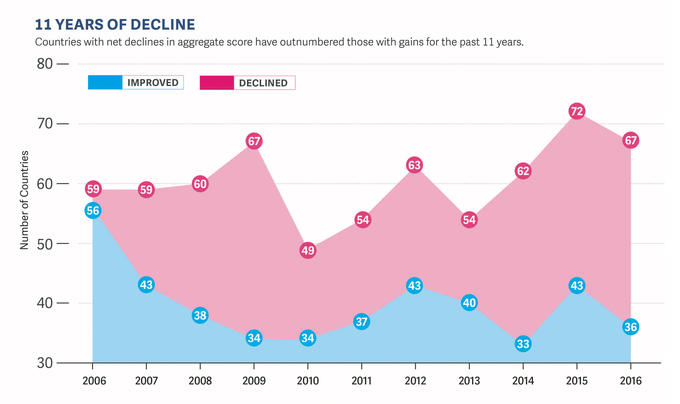 Analyses in the Freedom House report cover the year 2016. Therefore, the beginning of US President Trump’s period in office is not taken into consideration.

‘But there is definitely a risk that the USA will score worse in the future, given what the world has been witnessing in these past weeks. Several of Trump’s presidential orders concern constitutional issues, human rights and authoritarian tendencies.’

Already last year, the status of the USA as a democracy was dealt a blow when the   Economist Intelligence Unit (EIU) concluded, in its Democracy Index, that the country was no longer a full democracy.

Populistic and authoritarian regimes have much in common in their attacks on democratic institutions and human rights, according to the Freedom House report.

‘This means that populistic Trump in the USA, Le Pen in France or Wilders in the Netherlands views figures like Russia’s authoritarian Putin and Hungary ‘s controversial Prime Minister Orbán as allies.’