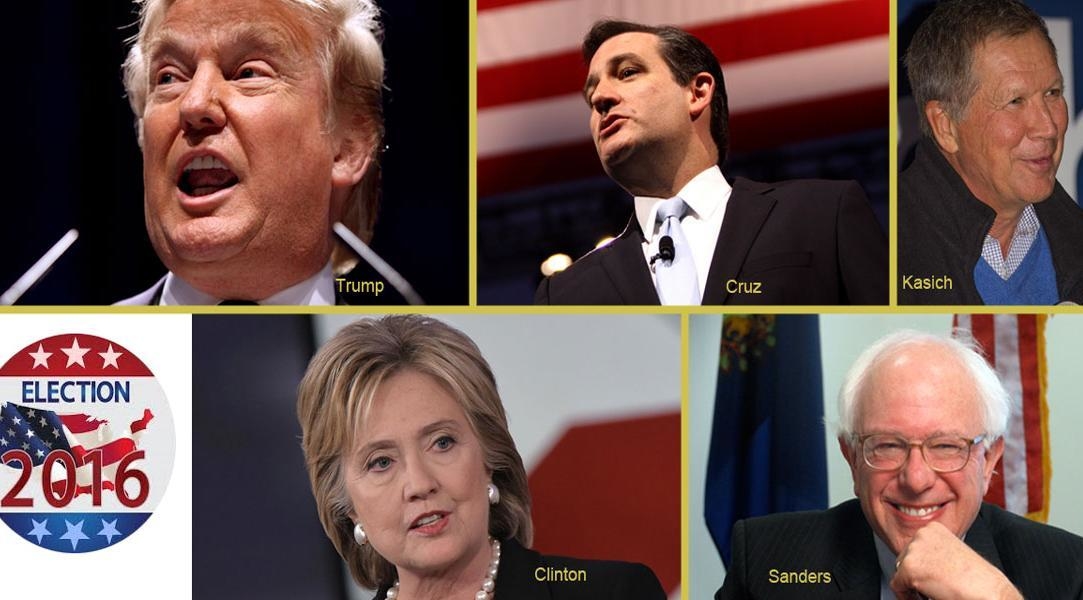 CANDIDATES: Trump, Cruz, Kasich, Clinton and Sanders are campaigning for US presidency.

Elections in the USA – implications on the Middle East

For decades, the USA has maintained a firm hand on the steering wheel in the Middle East. Will a new president change the course?

GOP = 'Grand Old Party' = The Republican Party - by some held as the oldest party in the USA.

The nomination process is moving ahead in the United States. On the Republican side, several candidates already have withdrawn. On the Democratic side, the campaign has been basically a duel. Has the world, with its analysts, become better at foreseeing where it will all end – for example how US policy on the Middle East will look from 2017? Hardly. There is too much divergence between the candidates on either side.

In a NUPI Policy Brief The US Presidential Election and its Implications on Middle East Policy, Sigurd Neubauer analyses the candidates and how they have positioned themselves in some key Middle East issues.

First of all: Just how important is the Middle East in US foreign policy? Has the region the same importance now that shale oil and shale gas may make the USA a net exporter of petroleum? Many would counter this argument by referring to the strong and special relationship between the USA and Israel.

Donald Trump: one step ahead

As of early April, it does seem as if Donald Trump – and Hillary Clinton – both have a good grip on the candidacy of their parties. Of the two, the unpredictable Trump is far harder to pigeonhole. On the one hand he talks of ‘forbidding Muslims entry to the United States’ – a statement hardly likely to bring him into dialogue with the conflicting sides in the Middle East. He has also criticized the nuclear agreement with Iran as ‘horrible’.

In his Policy Brief, Sigurd Neubauer adds that Trump has declared himself neutral in the Israeli–Palestinian conflict. This is contrary to customary Republican orthodoxy, as is Trump’s opposition to the Iraq War.

With his basically self-financed campaign, Trump is – unlike his competitors – not heavily dependent on wealthy sponsors, who traditionally want returns from a newly elected president. This self-financing can give him a freer position vis-à-vis for example the powerful Israel lobby. These elements may indicate that neoconservatives will hardly be the first to be called to a possible new Trump administration, according to Neubauer.

Despite some differences between Hillary Clinton and Barack Obama, Neubauer assumes that Clinton on the whole would pursue a foreign policy similar to or close to that of Obama. Obama's anti-IS orientation and the nuclear deal with Iran would probably be continued. The same applies to the close relationship with Israel, despite the extremely poor personal chemistry between Obama and Netanyahu.

So the question is whether Clinton will be as reticent as Obama when it comes to promoting US interests by military means. According to the New York Times, she can seem more action-oriented than the current president. In any case, Obama’s relative military restraint has fed the Republicans’ view of him as a major root of the 'declining power' of the USA. Many Republicans want to ‘make America great again’ – which might indicate a more activist foreign policy. Would also Clinton feel compelled to join that cause?

What about the rest of the candidates?

Ted Cruz and John Kasich are the two other remaining Republican candidates. Cruz is the favorite of the ‘Tea Party’ section of the Republican Party, most Israel-friendly and most hawkish to both IS and the Iran nuclear deal, and even most lenient as regards ‘unconventional’ interrogation methods.

The somewhat extreme positions of both Cruz and Trump have led some to wonder if Ohio Governor Kasich may be a kind of ‘dark horse’ for the party’s July convention – especially if the GOP leaders find that they cannot serve up Trump or Cruz to voters, but rather the more moderate Kasich. In that case, they would be acting act in line with US opinion polls, which give Kasich the best chances in competition with the Democrats’ Clinton or Bernie Sanders.

Sanders has focused on domestic policy issues such as the sizable and still-growing social and economic inequalities. This focus may itself reflect what many expect of him: a more introspective US foreign policy, perhaps with a certain resistance to increased free trade. With his Jewish background, Sanders may become the first non-Christian US presidential candidate. Like Clinton, he has not distanced himself notably from Obama's foreign policy.

As with previous US elections, only one thing is certain: everything is uncertain and impossible to predict.