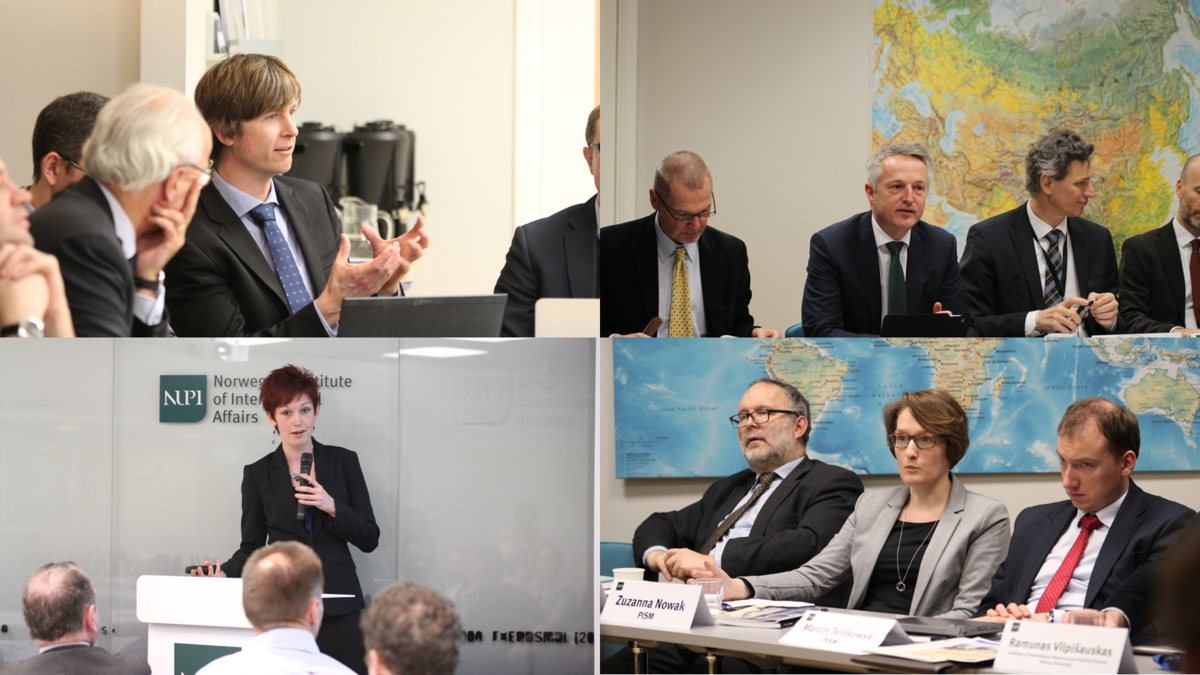 THE ROUNDTABLE SESSION: Director of the European Union Institute for Security Studies, Antonio Missiroli, Acting head of the Energy Project, Polish Institute of International Affairs (PISM), Zuzanna Nowak, Emily Cox from the Sussex Energy Group at the University of Sussex and State Secretary Tore Hattrem were some of the people present at the event.

Energy security in Northern Europe and the Baltic region

As an input to the EU’s work with their new EU Global Strategy on Foreign and Security Policy, NUPI and EUISS organized a roundtable session on energy security in Northern Europe and the Baltic region on February 11.

Some points to take away from Chatham house discussion:

-The issue of Nordstream was contested.

-The relationship between commercial and political aspects of energy security must be addressed, but can be difficult to delimit.

-There might not be such a thing as security of supply. The focus should rather be on the level of reliability of supply.

-The domain of energy security is a difficult one, partly because the EU can only influence it through legislation, but it is through the practice of the individual member states that security is achieved or not.

-Quite a bit has been achieved already in the EU.

-Going green will mean getting out of coal and might be an effect of the Paris agreement, but does not necessarily mean less security.

Energy security is an important, but complex, dimension of EU’s global strategy. After the 2004 EU enlargement, the political landscape of the Baltic region changed with respect to energy and energy security. In addition, the armed conflict in Ukraine has put the issue of energy security and security in general very high on the European political agenda.

Keynote speakers were EUISS Director Antonio Missiroli, Director of the IIRPS at Vilnius University, Ramūnas Vilpišauskas, Zuzanna Nowak from Polish Institute of International Affairs, Jakub Godzimirski from NUPI, and Emily Cox from the University of Sussex. The roundtable was introduced and chaired by NUPI Director Ulf Sverdrup.

Research Professor Jakub Godzimirski has been working on Russian foreign and security policy issues at NUPI for more than 20 years, paying special attention to the role of energy resources in Russian grand strategy. He describes the roundtable session as fruitful and interesting.

‘There are various understandings of energy security, depending on the actor’s place in energy value chains – importers of energy tend to focus on security of supply, while producers and exporters are mostly interested in security of demand.’ Jakub Godzimirski explains to sum up some of the main themes the panel were discussing.

‘In addition to those two perspectives – the suppliers’ and the importers’ – it is also important to have in mind the strategic dimension of energy that can be viewed either as a goal in itself, like in the case of the EU that has to import more than 50 percent of its energy; as an instrument, that for instance is used by Russia in order to achieve some other, non-energy related goals; or as means to achieve other goals, like in the case of Norway that uses its energy generated revenues to maintain its welfare system and secure welfare of next generations.’ he continues.

‘Another question discussed was whether Norway should be treated as an external or as an internal supplier of energy to the EU and what consequences this could have for Norway’s relations with energy suppliers and importers.’ Godzimirski adds.

During the following discussion which the focus was predominantly on the role of gas in European energy security. The discussion was under Chatham house rule (a rule according to which information disclosed during a meeting may be reported by those present, but the source of that information may not be explicitly or implicitly identified).

Director at NUPI, Ulf Sverdrup, is pleased with both the roundtable session and the Chatham House rule discussion.

‘By organizing events like this, with academic quality and political relevance, we are facilitating meetings between important stakeholders’, says director at NUPI, Ulf Sverdrup.

‘We also feel that the timing for the event was especially good. The EU is preparing their global strategy. Energy security is an important theme and so is the relation between Norway and the Baltic states’, he concludes.