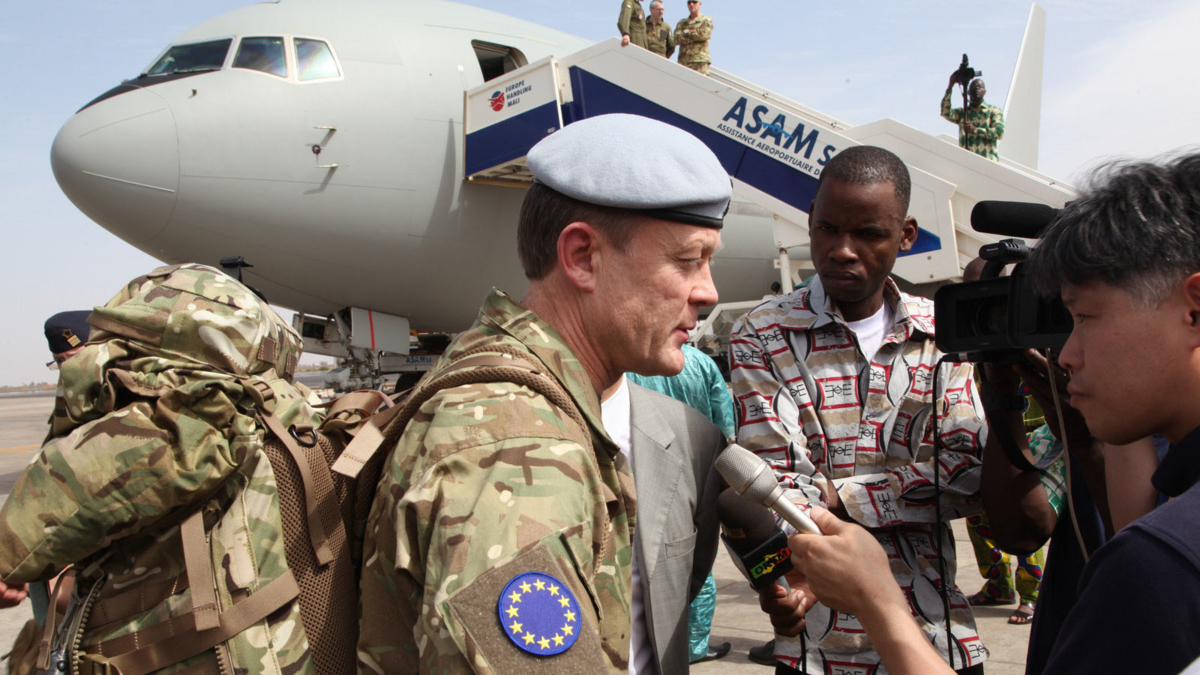 LIMITED IMPACT: The EU seeks for the sixth year running to rebuild a struggling state authority through training and advising the Malian police and army.The EU’s ability to have a sustainable impact on the ground, however, is severely limited, writes Junior Research Fellow Bård Drange (NUPI). The image shows an advance party of the mission EUTM Mali arriving in Bamako in 2013, marking the beginning of the advice component to the Malian army.

Engaging in ongoing conflicts brings with it a set of extraordinary challenges.

Bård Drange is a Junior Research Fellow at NUPI. He contributed this op-ed for EUNPACK, a three-year EU-funded research project on the EU’s crisis response. The op-ed was originally published by Euractiv.

Since 1992, the EU has launched more than 35 civilian and/or military missions abroad. The EU seeks, ideally, to prevent conflicts before they erupt. However, it has also been involved in ongoing, violent conflicts as well as post-conflict scenarios. Engaging in ongoing conflicts brings with it – naturally – a set of extraordinary challenges.

A case in point is Mali, a country which suffers from contested state authority and a weak army faced with several rebel groups and jihadist insurgents. Here, the EU seeks for the sixth year running to rebuild a struggling state authority through training and advising the Malian police and army.

The EU’s ability to have a sustainable impact on the ground, however, is severely limited. This is partly due to the abovementioned mixture of challenges – which are certainly also found elsewhere. However, what our research shows, is that many obstacles also lie within the reach of the EU to address directly.

Indeed, by interviewing key people from local and international organizations as well as surveying people on the ground in areas where the EU operates, we have identified five paradoxes that characterize the EU’s crisis response in countries such as Mali.

We have also found these in Afghanistan and Iraq, also countries in which the EU has been heavily involved with building state authority through the police, army and justice system.

To ensure a greater impact and get closer to achieving the great potential the EU’s comprehensive approach has, the EU must address the following five paradoxes.

Political elites vs people on the ground

The first paradox is that while the EU strives to make its missions locally owned, the EU mostly ends up gaining support from political elites only. This can be problematic, especially in countries in conflict, where the legitimacy of the national leadership may be highly contested, and where the distance between elites and people on the ground is vast.

Getting approval from national elites to operate is important, but gaining support from people and organizations on the ground is essential. True local ownership requires more than approval; it requires tight cooperation throughout missions.

The second paradox is that while the EU aims for conflict sensitivity in its crisis response, interventions tend not to be based on an in-depth analysis of local dynamics and root causes of the conflict.

Hence, responses are not tailor-made to the needs of the people in question. Instead, the EU’s response is very much made in Brussels based on limited consultations with those whose rights it wishes to protect or promote. Such interventions may end up producing counterproductive results.

The third paradox is that the EU seeks a demand-driven crisis response where the needs of the population living in the conflict-zones are a priority. In practice, however, interventions are often supply-based. Indeed, it is most often its interests that drive its response.

The EU gets involved on its own premises – building state authority or curbing migration – which are not always what local stakeholders and people on the ground want and need.

The fourth paradox is that the state- and peace-building efforts of the EU often end up with a militarised approach. In the countries we have studied, notably Afghanistan, Iraq and Mali, the EU seeks to build state capacity to deal with various armed groups.

However, with an increasingly militarized response, it fails to solve root causes and raise chances of a political solution and reconciliation.

The fifth paradox is that while EU preaches long-term solutions and seeks to build sustainable peace, in practice it often does short-term conflict management. This happens, for example, through the strengthening of the security apparatus, without deep-rooted changes in the management culture.

Similarly, the militarised approach in paradox four may provide some stability for some time, but over time, such states with limited legitimacy may face great challenges and instability.

The above-mentioned paradoxes are key reasons for which the EU’s impact is limited. They were identified in our research on Afghanistan, Iraq and Mali, but we also find them in other contexts. It is also important to note that the EU is not alone; many other international engagements frequently suffer from these shortcomings.

Going forward, the EU should make efforts to address these paradoxes. Cooperating more constructively with local actors and designing missions increasingly based on local needs is important. But so is thinking long-term.

While some actions may be favoured in the short-term, the EU must consider more carefully what consequences these may have later down the line.

The EUNPACK project has examined the EU’s capacity or lack of capacity to engage in external crisis response. One of the key findings is that while the EU is heavily engaged and has a comprehensive approach to crisis throughout the crisis cycle, the EU lacks conflict sensitivity based on an in-depth understanding of the root causes of conflict in the areas it is engaged. For more information on NUPI's research on Europe and the EU, please visit NUPI Centre for European Studies (NCE).