KEY EXPORT GOOD: A Chinese business man takes a closer look at a salmon at the conference An Ocean of Opportunities during the Norwegian king and queen's state visit to China in 2018.

Agreements and regulations within the World Trade Organization (WTO), the European Economic Area (EEA) and other free trade agreements enable Norwegian businesses to sell their goods abroad without paying as much tax as would have been the case if no such agreements were in place. Similarly, foreign enterprises can sell agreed-upon goods to Norway without encountering high tariff barriers.

For Norway, this means that we can export products that we have in abundance, such as fish and various metals, without these being considered too expensive for consumers in other countries.

Writing in a special issue of The World Economy, Senior Research Fellow Hege Medin (NUPI) takes a closer look at Norway’s free trade agreements outside the EEA and EFTA. Such agreements between two countries, or smaller groups of countries, are often referred to as bilateral trade agreements.

The background for this article is a 2018 publication by the World Trade Organization (WTO), a Trade Policy Review (TPR) on Norway. However, according to Medin, the 150pp+ evaluation of Norwegian trade policy is inadequate, particularly in one area:

‘The evaluation is extremely useful for those who want to know about Norwegian trade policy. But one thing is missing: mention of our bilateral trade agreements. The EEA is a more important agreement – but still, this omission seems very surprising’, Medin notes.

Norway currently has 29 bilateral free trade agreements with 41 countries. The trade conducted within these frameworks makes up 10% of Norway’s international trade. 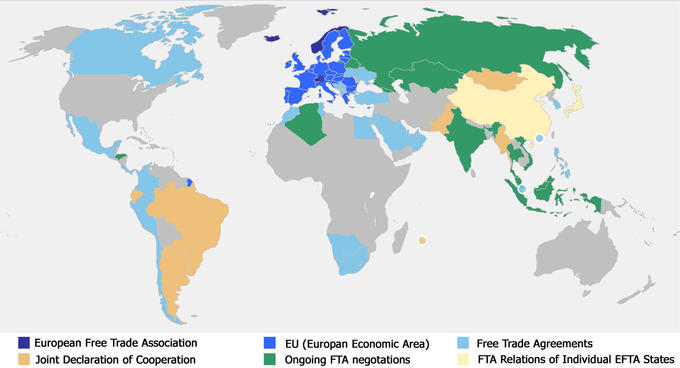 COMPREHENSIVE: An illustration of Norway's free trade agreements - including the areas where negotiations are in progress.

In fact, Norway’s bilateral agreement network is one of most comprehensive in the world.

‘One important reason is that we are heavily dependent on international trade. Even back in the Viking times, we sold dried fish abroad. Today, as a small country with a one-sided industrial structure based largely on raw materials, we are dependent on exporting. Try to imagine what it would be like if we had to spend all our oil ourselves’, Medin points out.

Moreover, Norway’s most significant trade partners, the EU in particular, have entered into many free trade agreements. As the EU member states negotiate as one bloc, this means that when the EU concludes a free trade agreement with another country, the one party is the entire 28-member EU – a very large market indeed.

‘When our most important trade partners enter into significant trade agreements with other countries, it’s important for us to align, to prevent trade being diverted away from Norway.’

‘Attention generally focuses on the EEA Agreement, but the bilateral agreements are important to Norway and will become increasingly so in the future’, Medin goes to explain.

‘And’, she notes, ‘with the UK – one of our most important trade partners – leaving the EU, we are likely to have to negotiate a separate free trade agreement with them.’

On the other hand, dissatisfaction with Norway’s most important trade agreement is also on the rise.

‘This scenario is probably less likely, but if Norway were to leave the EEA Agreement, we would need to reach some kind of new agreement with the EEA.’

Moreover, the WTO, functioning as a multilateral trade agreement between its 164 member states, finds itself in what many see as a crisis.

‘The WTO is struggling, because its dispute settlement mechanism is no longer able to operate as intended. Reaching agreement on new areas, like services, has proven difficult, even though these areas have become increasingly important. The WTO is falling behind’, Medin explains.

In short, today’s Norway is a small, rich and open country, with a liberal regime for international trade.

‘Low tariff rates are part of such a regime, but we also practice an open policy in several other areas, for example concerning foreign investments.’

Why have we chosen this approach?

‘According to economic theory, low tariff rates are usually profitable for a state. But there are situations when other political goals play a role. Norway, for example, has chosen to be especially protective of Norwegian agriculture, and therefore has high tariff rates on imported agricultural goods.’

But these protective measures are not without cost, Medin explains:

‘This results in more expensive goods for the consumer, and in economic resources not being channelled where they can create the highest revenues. That could in turn curb growth in new industries – for example, of the kind that Norway will need in a post-oil era.’